I've been meaning to post about my son's Spiderman birthday party for the last six months, but it turns out to be good timing anyway because there are some cute ideas for Halloween too. The spider web cupcakes and spider web decoration were really easy to do and would be a big hit at any Halloween bash. If you're looking for DIY Spiderman party ideas we have those too - favors, pinatas, and even a free printable. 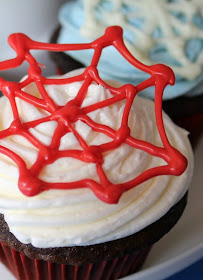 Since we don't have a lot of room in the budget, I made almost everything for my son's Spiderman birthday party myself. He really wanted a pinata and I found such an easy tutorial at The Copycat Crafter that I made one for each of the kids at the party. I painted them red, used a black permanent marker to add lines, and glued on white paper eyes to make each Spiderman pinata. 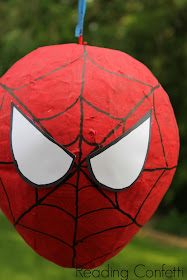 I used the same idea for the Spiderman favor bags. I started with red bags (you can get cheap red lunch bags at Target) and added black marker lines and white paper eyes. 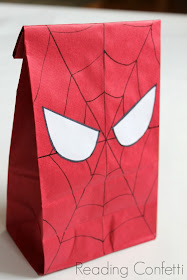 To be honest, I don't remember everything I put in the favor bags, but I do remember one thing. Each of the bags had a can of silly string which I renamed "Web Blaster" by making a simple Spiderman printable and taping it around the can. I used my printer to make them 5x7 photos printed on regular paper. I did end up trimming them a little bit. 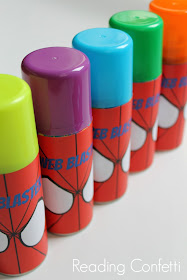 We used black crepe paper for the decorations and made a web from the middle of the room. 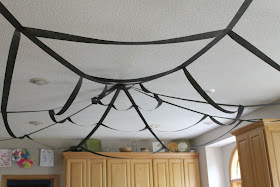 For the cake, I made cupcakes and topped them with candy spider webs. I melted some Wilton's red and blue candy melts and piped them onto wax paper. I got the idea from Country Living and you can follow their pattern, but I basically made an "X", a "+", and then connected the lines. Once they've hardened you can peel them off the wax paper and put them on top of your cupcakes. 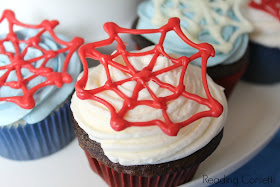 I piled them all on a cupcake stand and added a Spiderman figurine from the dollar store to the top one. 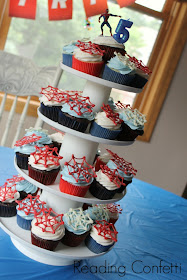 He was happy with his homemade Spiderman party, so I'm calling it a success.