We're having so much fun participating in Learn~Play~Imagine's candy series. On Monday, we painted some fall trees using Nerds candy and today we're using candy to practice counting and math. Apparently I LOVE fall trees, because this math activity involves them too. We used candy corn for the leaves this time. You can easily adjust this activity for older kids by using math facts instead of numbers. 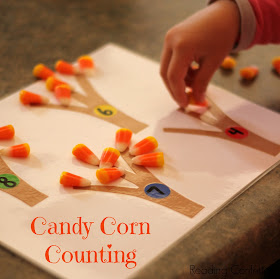 I started by cutting simple fall trees from brown construction paper and gluing them down. I also added a round sticker as a place to write the number. I decided to laminate the page so we could write the numbers with a dry erase marker and use it over and over again. 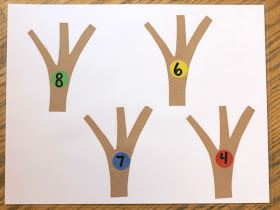 After I wrote a number on each tree, my three year old put the correct number of candy corn leaves on each tree. 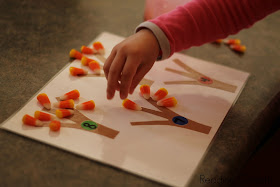 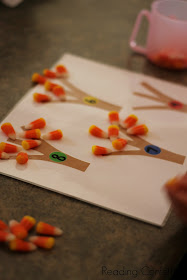 Since my 5 year old is interested in telling everybody that 2+2=4, I thought we might add a few more addition problems to his repertoire, but he was only interested in eating the candy corn.