This is basically just ice chalk in a ball shape. We froze some of our chalk bomb water balloons, peeled off the balloon, and had a new way to play outside. I didn't have a specific activity in mind when I made these, but I knew the kids would come up with something fun. They're like giant frozen chalk marbles. Just a few ingredients, an old pump bottle, and some water balloons are all you need to keep the kids busy on a hot summer afternoon. 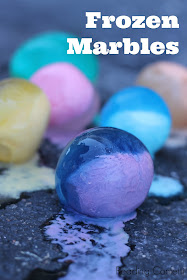 If you missed our chalk bombs, we made them by filling up some water balloons using homemade chalk paint (half cornstarch, half water, food coloring) and an old pump bottle. Then we froze some of them. 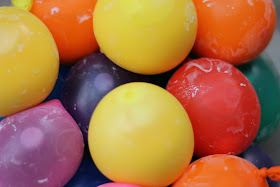 When we peeled off the balloons, they looked like big marbles though they were not perfectly round. The cornstarch had settled some, but I think it made them look prettier. 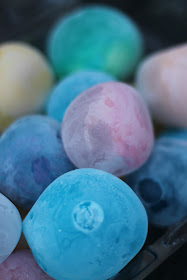 The kids rolled them back and forth over some paper. It wasn't a very hot day, so the marks they left were pretty light. They rolled them down the slide and down the driveway. 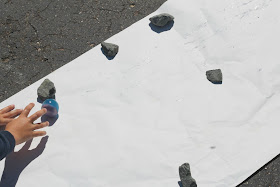 I had a vague idea that I would teach the kids to play Ringer with our marbles, but once we got outside I realized I couldn't remember how to play it. Oops. 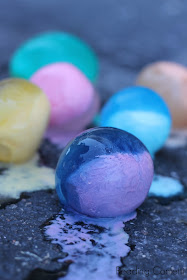 We do have a favorite marble story though. Penny and Her Marble by Kevin Henkes. Penny finds a marble and takes it even though it doesn't belong to her. At first she's thrilled to have the marble, but she slowly begins to realize that doing the right thing feels better. 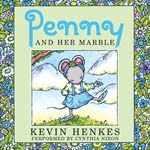 Did you play marbles when you were a kid? Do you still remember how to play?