Yesterday we made some toilet paper roll Christmas trees and just by painting them red and adding a white pom pom at the top, they also make cute Santa hats.  They are pretty self-explanatory, but you can find some tips on making them here. 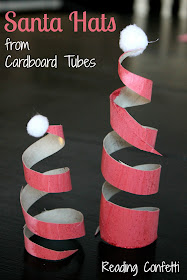 Some of our favorite Santa books:

Little Bear is anxious to see Santa on Christmas Eve.  He decides to wait up, but every time he hears a noise, it turns out to be something like Big Bear drinking Santa's milk or Mommy Bear setting out her gifts.  Little Bear is very worried that something is going to go wrong for Santa. Eventually Little Bear, Big Bear, and Mommy Bear all decide to wait up for Santa.  The illustrations of the furry bears are adorable and this is a perfect book for preschoolers.  The first time we read it, I wondered where it was going and if the secret of Santa was going to be revealed, but the last page shows Santa watching the three bears sleep under the Christmas tree.

Are You Grumpy, Santa? by Gregg and Evan Spiridellis

is a humorous story all about Santa's bad day beginning with being woken by the snore of Mrs. Claus and ending with dropping from a chandelier.  Our favorite part is when Santa gets stuck in the chimney of the first house.  "He wiggled side to side, then gave a mighty push.  He fell into the fireplace and sprained his chubby tush!"  Santa's misadventures continue all over the world.  "In Paris, he was chased by a tiny, growling puddle.  In Italy, he slipped upon a rigatoni noodle." Finally, Santa roars, "I'm a grumpy Santa Claus!"  and then spots some cookies and a card made for just him.  His grumpies disappear.  It's a fun book with a lesson about doing nice things for others.

Where, Oh Where, Is Santa Claus? by Lisa Wheeler

It's Christmas Eve and Santa has gone missing!  The reindeer set out to look for him and soon all the animals at the North Pole have joined the search.  This book has rhythmic, rhyming text and an unexpected ending.

Santa is so busy making toys and running the North Pole that he never has time to play with the toys.  It almost makes him grumpy until Mrs. Santa Claus comes up with a solution that makes him very happy.  First published in 1950, this has great vintage illustrations.

This is a silly story with a great message.  When Duck is mysteriously given a Santa hat and coat, all the animals clamor to tell them their wish lists.  Duck gets so fed up that he tries unsuccessfully to give away the hat.  He becomes so wrapped up in delivering Christmas wishes to Santa that he forgets to share his own.  But what he finds out is that it's better to give than to receive.


What are some of your family's favorite Santa books?