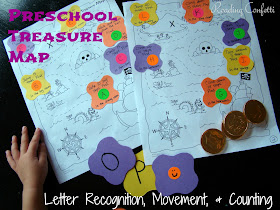 Well, this turned out to be a little bit of work on my part, but it was my own fault.  I was trying to be lazy, but my four year old would not have it.


He really likes maps so we checked out the book   Follow That Map!: A First Book of Mapping Skills

from the library.  This is a great introduction to all kinds of maps and the features of maps.  A group of children loses their cat and dog and go looking for them using a variety of maps, asking the reader questions along the way.

Here comes the part where I don't look so good.  Drew's favorite map was the treasure map and he really wanted to do a project with a treasure map.  (Sometimes I just curse myself for coming up with such crazy fun projects. Sigh.)  I am almost always up for a good project, but this was Sunday morning.  Early Sunday morning. And I could not be described as a morning person.  I briefly thought about making one of our letter treasure maps, but I thought I could pacify him with printing off a treasure map to color.  There's lots online but I used one I found on Spoonful. 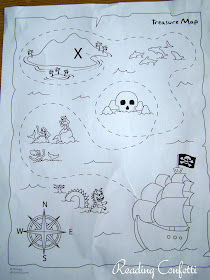 Do I even need to tell you that this was not going to cut it?  This is the point when I thought, this kid is driving me crazy.  He needs to burn off some energy.  I'll modify the map so he has to move around a lot.  And once I had started that I figured why not add some letter recognition in there since I was already off the couch anyway?

I made some construction paper cut-outs that said things like, "Take 10 big steps.  Find A in the dining room." and "Do 20 jumping jacks.  Find B in the kitchen." (See how I snuck some counting practice in there too?  Sneaky, aren't I?) 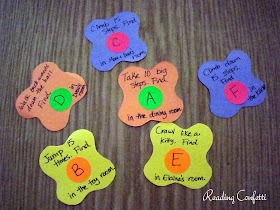 I stuck these to the map. 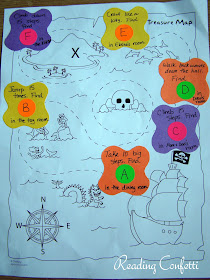 I also made 3 letters for each room.  I put a smiley face on the back of the correct letter. 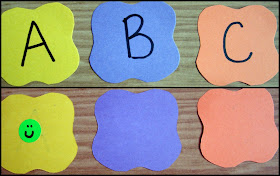 Then I hid them: 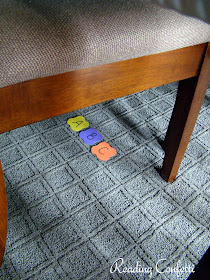 My two year old stayed interested for about 4 letters, but Drew did the whole thing and then did it all again.  It didn't hurt that the last stop had two chocolate/gold coins.  What's a treasure map if it doesn't lead to treasure?
Share