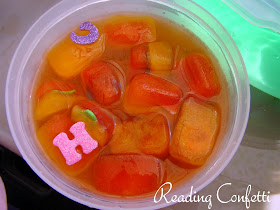 There are so many ways to adapt this activity!  I'll start with the activity for the youngest (which we did) and work from there.

Letter Recognition
I took some small foam letters (from the dollar store) and stuck them to paper with double-sided tape.  I made a copy of the paper and laminated it.  You could skip this step by just writing the letters you're going to use on a piece of paper. 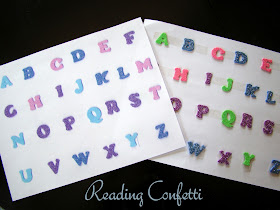 I froze those same letters into colored ice.  (The letters are made of foam and want to float so I filled the ice cube trays half full with the letter on top, froze them, then added more water and put them back in the freezer. This is also a good chance to make multi-colored ice cubes!) 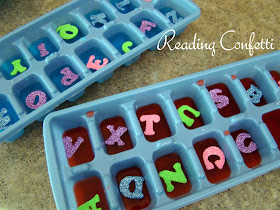 We picked a hot day to play with the ice. 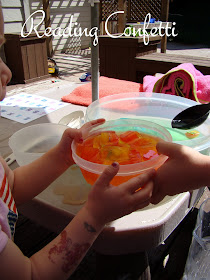 As the letters melted out of the ice, I encouraged them to match the letter they found to the paper.  It started off well: 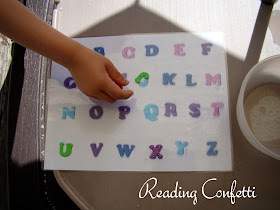 And then Drew lost patience: 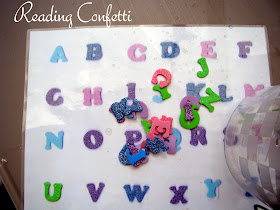 But they played for a long time with this, especially Lainey, who loves playing with water. 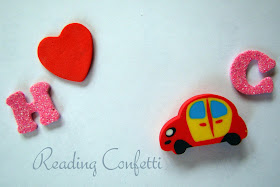 Site Words - make a list of your child's sight words, or skip the paper part and see what words they can make from the letters you've hidden in the ice. 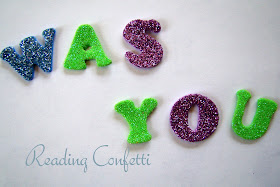 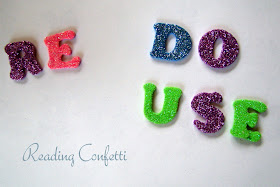 Secret Message - Hide the letters that spell out a secret message, which the kids would have to unscramble after finding the letters.  Obviously, you'd need to tailor it to your child.  Beginning readers might just have one word, while older readers could unscramble longer messages. Some secret messages could be:
You know you thought of some too...let's hear 'em in the comments.
Secret Message or Alphabet Line-Up (Groups)- Now I know the majority of middle schoolers think everything is lame. But they are generally more accepting if it's something that gets them out of regular class, especially those last few days of school.  Take them outside, give each kid an ice cube and have them work together to unscramble a secret message.  Or make the cubes with each letter of the alphabet (I've heard cold water makes cloudier ice cubes) and after everybody melts their letter out, have them line up in alphabetical order while you time them.  (Just be sure to set some guidelines, know that somebody is going to get ice down their back, and hope like hell it's not you.)

This could also be a fun summer birthday party game. Divide them into teams and see who could melt their ice cubes and unscramble their message the fastest.

I'm telling ya, the possibilities are endless.